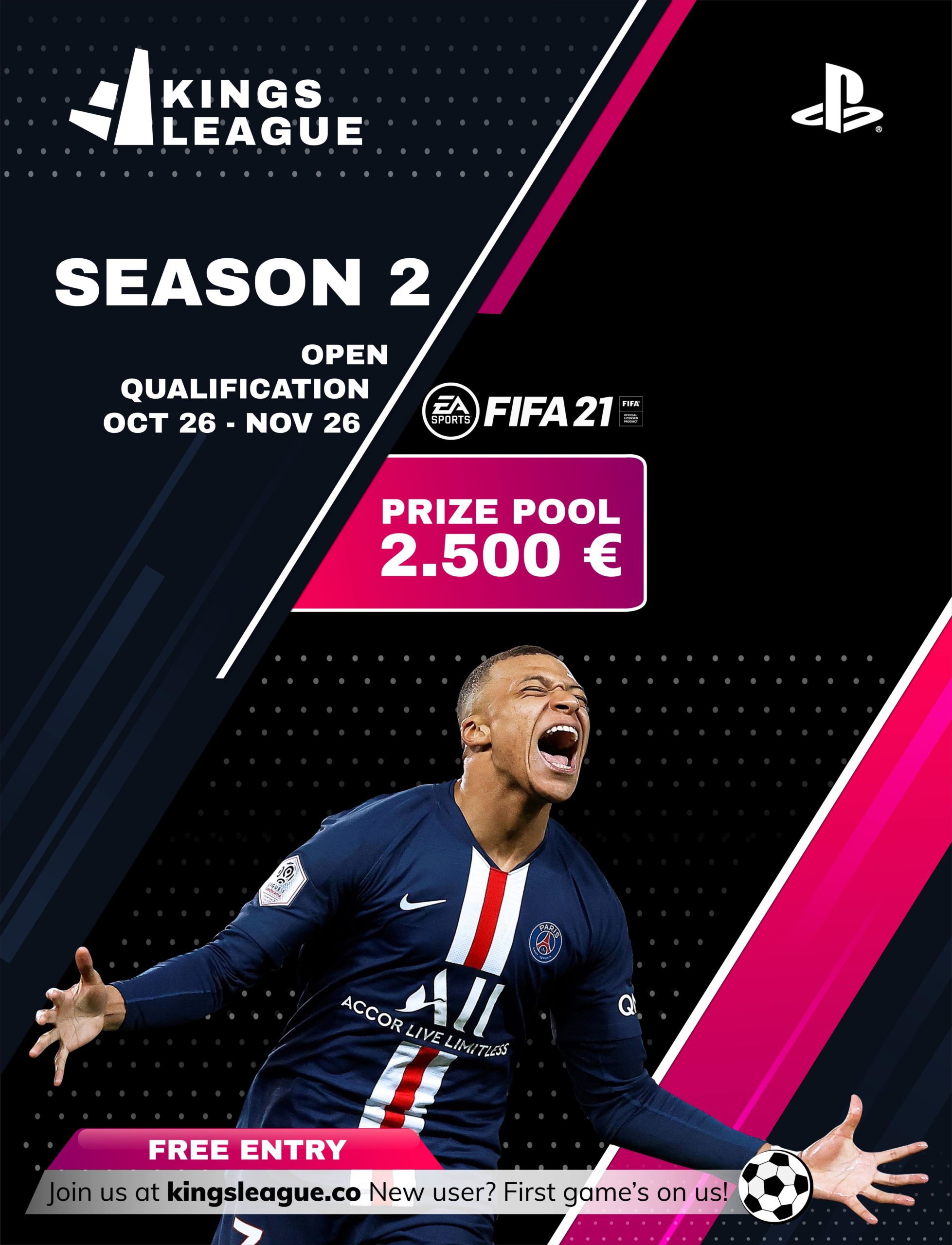 After a complete success in our Season 1 and the recent launch of FIFA21, we are excited to announce Kingsleague’s FIFA 21 Season 2: a 2.500€ tournament, where we will not only include FIFA 21 friendlies, but also FUT 21! Again, this tournament will be focused for our PS4 community. To register for the Season, sign up to Kingsleague today!

Starting October 26th, we will have an open and ongoing qualification round, until November 26th.

There are primarily three major changes in our FIFA 21 Season 2:

Entering Kingsleague’s FIFA 21 Season 2 is completely free! The top 32 players – 16 in FIFA 21 and 16 in FUT21 – who collect the most points, will secure their spot to the next round .

WHEN AND HOW WILL KINGSLEAGUE’S FIFA 21 SEASON 2 WORK?

All user stats will be restarted at 00:00 on October 26th and they will be able starts for one month until November 26th. Users can play as many matches as they want to sum up in either one of the two ladders – FIFA 21 and FUT 21.

Users may play in both ladders, but in case that a user qualifies in both, he/she will only take one spot in the next round.

It is important to know that your points are only valid for one ranking and cannot be combined.

For example, if a player is ranked 14th in FIFA 21 and 10th in FUT21, he will only get one place in the group phase and the next best placed player will move up. Afterwards a total of 32 players will move on to the group phase.

From the group phase onwards, all matches in normal FIFA 21 are played as online friendly matches to ensure maximum equality of opportunity.

Within the group phase 32 players will be divided into 8 groups of 4 players each.

Each player will only play once against the other group members and will therefore play a total of 3 matches.

The best 2 of each group then move on to the knockout phase.

In the knock-out phase, best-of-3 matches are played. The player who first wins two matches will advance to the next final round.

During the qualification phase the aim is to score as many points as possible.

The points you receive per match depend on your opponent’s rank and the amount of money you play for.

Please also note that there are extra points for rematches!

At Kingsleague we are true believers of the sportsmanship spirit – the ethos of enjoying a game, regardless of the result. You will not only receive points for winning, but also for losing

During the tournament you will receive 25% of the points you would receive if you won!

We can’t win all games, but we can definitely enjoy them all.

RULES FOR THE DIFFERENT STAGES

Joining the season is completely free. The amount of All FIFA 21 and FIFA 21 Ultimate Team are to be played in online friendly matches. Please visit the FUT21 rules here to learn more, the FIFA 21 rules, or our general Kingsleague rules here.

We will require users to comply with some requirements starting on the group stage, in order to follow local laws and to deliver our sponsors prizes!

From the knockout phase onwards, all participants are subject to a streaming obligation.
So please make sure you have a good enough internet connection to stream and play at the same time.
Whoever cannot ensure this, cannot compete in the KO phase and the spot will be given to a successor.

Again, all matches will be played for 1€.

Knockout stages will be managed on a best out of three and move onwards towards the final.

The prize pool will consist of a 2.500€ cash and sponsored prizes, delivered through the app and directly to your home!

We will update the complete prize structure continuously, so stay tuned!

We have awesome sponsors structuring this season and we’re thrilled to announce them shortly.